Known as the “City of Lakes” with more than 30 lakes, Thane is the immediate neighbor of Mumbai in the state of Maharashtra and is also a part of the Mumbai metropolitan region. Known as the center of the industrial part of Maharashtra, Thane has a lot to offer. Besides being industrially advanced, Thane offers plenty of amazing places to visit and spend relaxed weekends. Read about the best tourist attractions in Thane in this article and plan your next trip soon. 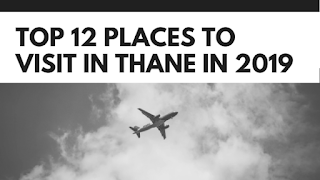 Spread over an area of 320 sq km, Tansa Wildlife Sanctuary is one of the most famous places to see in Thane. The sanctuary is home to numerous endangered animals and has a variety of rare species of both flora and fauna. Also, there are about 200 different species of birds that attract the eyeballs of humongous bird watchers from around the world. Among the various animal species, one can find animals like hyenas, panthers, jackals, tigers, sambars, mouse deer, barking deer, wild boars, etc. There are several accommodation options available near the sanctuary if you want to spend a weekend near nature. However, if you wish to stay, you will need to make bookings before arriving at the place. There are also some nearby attractions like Tansa Lake and Mahadeo Temple. The best time to visit Tansa Wildlife Sanctuary is from November to May.

Located in Titwala district of Thane, Titwala Maha Ganesh Temple is also known as Siddhivinayak Mahaganapati Temple. According to the myths, if someone regularly prays to Maha Ganesh over there, he or she shall get married to the desired person of their choice very soon. The temple also has a small shrine dedicated to Lord Shiva. The best time to visit this place is during the period of Ganesh Chaturthi and Angarika Chaturthi. Millions of people every year come to visit this place and pray for their well-being. Outside the temple area, there is also an artificially built pond that is surrounded by a beautiful garden. Also, boating facilities are available for the pond. On the basis of the popularity of this temple, it features on the list of places to see in Thane.

Situated in the Malshej Ghat region of the Thane district, the Naneghat hills are among the most beautiful tourist attractions. The hills are at an altitude of 838.2 meters above sea level. The hills are popular because of the ancient mountain pass from Ghatmatha to Konkan and have several caves along with water cisterns carved out of rocks. Among all these caves, some have historically significant inscriptions written in the Brahmi language. The place is a famous trekking spot in Maharashtra. Nanacha Angtha is the peak of Naneghat Hills and is ideal for those who are looking to plan their next trekking trip in Maharashtra.

Looking for a place to visit on the weekends in Thane with family, and have a really fun time? If yes, then Essel World is the best choice for you. Essel World is an immensely popular tourist spot in Thane and is located in Gorai. The park offers you 34 amazing rides such as Bumping cars, Rollercoaster, etc. Also, Water Kingdom is located close to the Essel World and has Asia’s largest wave pool. No matter what your age is, Essel World can be really exciting to visit. The place can be easily reached via any transportation medium like a bus, cab, and private vehicle.

Stationed amidst lofty hills and a lush green valley, Tikuji-Ni-Wadi is one of the most alluring tourist attractions in Thane. It is located in the Manpada Chitalsar village of the Thane and is around 40 km from Mumbai. The huge resort is spread over an area of 20 acres and has a water park, amusement park, and a resort as well. The water park comprises many water slides for all ages and also owns an aqua store. On the other hand, the amusement park has several rides like giant wheels, bumping cars, spaceships, merry-go-round, rollercoasters, etc. Though the water park is open on all days from 10 AM to 6 PM, the amusement park opens an hour late and closes after an hour, which is from 11 AM to 7 PM. And the resort opens at 9 AM and closes at 7 PM.

Founded and reconstructed by J.K. Singhania, Upvan Lake is located near Gawand Bagh and is also known as “Lover’s Paradise”. This place is widely popular among the locals as a recreational area and is one of the top places to see in Thane. The lakes are among the biggest as well as most attractive lakes in Thane and are surrounded by Yeoor Hills. There is also Lord Ganesha’s temple near the lake that was also built by Mr. Singhania. The place is popular because of hosting the Sanskruti Arts Festival that is known worldwide.

When it comes to spending holidays, beaches are the first thing that comes to mind and Thane has a beautiful beach named Kelva Beach. Kelva beach is one of the largest beaches in Maharashtra making it one of the most popular tourist attractions in Thane. The beach stretches around 7 km along the coastline of the magnificent Arabian Sea and offers an enchanting view of the same. The Suru trees alongside the beach line make the entire scenario even more alluring. The beach also boasts of a very popular temple in Thane and that is the Sheetla Devi Temple. Also, Kelva Fort is near the beach and draws the attention of several tourists. Because there is so much in one place, Kelva beach is among the top places to see in Thane.

Built-in 1532, the Bassein Fort is now known as the Vasai Fort. The fort is located in Vasai that is under the Thane district. The fort was built by the Sultan of Gujarat- Bahadur Shah and was later set up by the Portuguese. Later, it was taken over by the Marathas in 1739. The fort was constructed for providing protection to the entire area of Bassein that covered around 60,000 inhabitants, 58,000 Indian Christians, and 2,000 Portuguese. However, the fort is currently in a ruined state. The most attractive part of the fort is its gateways that have beautiful inscriptions on them. The place is enclosed by the sea on three sides and because of this feature, it has also been featured in several Bollywood movies.

Also known as the Bhorapgad Fort or the Boho Raigad Fort, Sudhagad Fort is a historically significant fort in the district of Thane. The fort was originally built in the 2nd century and was later captured by Bahmani sultanate in 1436. In 1650, the fort was occupied by the Marathas. The Sudhagad Fort is widely known as Bho Raigad Fort because of the existence of a shrine dedicated to Goddess Bhorai Devi. The place is also popular as a trekking spot and comprises of some tombs, a huge granary, two beautiful lakes and a few shrines as well. The fort has three huge entrances among which Maha Darwaja is the biggest one. The place is popular as one of the prime tourist attractions among both Indians and foreigners.

Stationed near the Masunda Lake, St. John Baptist Church was formerly known as St. Anthony’s Church. The church was built in 1852, under the leadership and guidance of Fr. Antonio do Porto by the Portuguese Missionaries. When in 1737 the Marathas seized the entire city of Thane and demolished all the churches, the name of St. Antony Church was changed to St. John Baptist Church. Over the years, the church has undergone several renovations to fortify the structure. The church is very popular among the Christians of South India and so the front porch was extended to accommodate the rapidly growing number of visitors around 1965.

Kashmira is the aggregate of two panoramic villages named Kashi and Mira, found in the district of Thane. Both the villages offer an enthralling scenic view of lush green valleys and mountains. Along with mountains, several lakes also surround the entire area. The roads leading to the spot are curvy and provide immense pleasure while traveling to the villages. Kashi Mira is accessible from a small station in Mumbai called Dahisar. Both the villages are divided by a landmark that is the St. Jerome’s Church. The church was built in 1595 and is more than 400 years old and since then it has been serving as the dividing point of both villages. The church has been renovated merely three times after the construction. These villages also conduct an annual fair on the 25th and 26th of December every year.

Located in Jawahar, Jai Vilas Palace was the home to tribal kings of the Mukane family. The palace was originally built by a tribal king named Yashwantrao Mukane. The palace is widely known for its marvelous architecture and designs and is surrounded by thick green forests from all the sides and is situated atop a rock. The palace offers a breathtaking view of beautiful surroundings that include trees, hills, and lakes. The place comprises 80 rooms that have a variety of antique furniture. The palace has several stuffed tigers and a huge lobby that is decorated with antiques and wooden items and attracts the attention of visitors. Currently, the palace serves as an area for cashew nuts plantation which adds to the beauty of the palace. The area is around 80 km away from the city of Thane and yet it is one of the most famous places to see in Thane. You can reach the spot with the help of a cab or private vehicle.

If you’re someone who wishes to explore a place because it offers a mixed bag of tourist spots, Thane should be at the top of your list. From temples and forts to lakes and hills, Thane has a plethora of attractive places to delight your senses. Be it family outings or a trip with friends, Thane can serve all your desires. So, book a hotel in advance, according to your taste and budget, and get ready for an interesting trip.

Stay Updated with Explorethane.in We’re on a journey to Explore Thane City. Join us by following along. Follow us:

How to Reach Mama Bhanja Hill From Thane Station