Places in Thane To Hangout

Thane City is one of the popular city in all over Maharashtra and Thane also called the lake city because of 33 Lakes in Thane. so Today’s article is about “Places in Thane To Hangout” we going to share some amazing places in Thane you should Hangout with your family and friends.

Places in Thane To Hangout

The Upvan Lake, an artificial, eco-friendly lake in Thane, Maharashtra, built-in 1880 by Thane Municipal Corporation, was re-constructed by JK Singhania for the supply of water to the Raymond Factory. It is now regarded as one of the most scenic lakes in the country, famously known for hosting the Sanskruti Arts Festival annually. Set in the backdrop of Yeoor Hills, it is a perfect setting for a picnic with your family or simply a stroll with your lover. Also known as Thane’s Lover’s Paradise, the lake was once used as a major source of water supply in the city. Now, however, it is used solely for recreational purposes with several activities being provided.

At the center of the lake, lies a statue of Lord Shiva, which was constructed to measure the depth of water around it. Adjacent to the lake is a temple dedicated to Lord Ganesha for the devotees to offer prayers. The Upvan Lake was one of the thirteen lakes to be restored by Thane Municipal Corporation using the bioremediation technique to clear the silt and marine plants to increase the oxygen level in the water.

Suraj Water Park is a theme park in Thane. It was conceptualized by Arun Kumar Muchhalla who is the chairman of Muchhalla Magic Land Pvt Ltd and the owner of the water park. White Water West Industries, Canada designed this theme park over 11-acre land in the city. This park has the longest tunnel in the continent which is made using fiberglass. It has a museum where there are a number of genuine ancient locks. The water park also has 16 slides, including a rainbow slide, a waterfall which is Asia’s largest artificial waterfall and a village themed section called Surajgadh. The park also has locker facilities (rent and deposit charges are applicable) where visitors can keep their belongings.

The themed décor at Suraj Water Park consists of an unusual combination of Traditional and Modern Technology. As soon as the visitors enter, they are greeted by two humongous mermaids on either side of the entrance. As they proceed, they would come across idols of Lord Shiva and Lord Natraj before they head to the thrilling rides and slides. With these features, the water park subsequently gained entry into the Limca Book of Records in 2006 and bagged six different awards including “Pride of Maharashtra” Award by the Department of Tourism, Maharashtra (1999), “Resort of the Year” (2001) and the “International Golden Pony Award” (2001).

Famous as the beautiful and quick getaway from the chaos of metropolis, Yeoor hills is located in Upvan, in the Thane district of Mumbai, Maharashtra. The place experiences its first rainfall from the monsoon winds, making the surroundings more vibrant and refreshing.

It is also called Yogi Hills in Mulund and “Mama Bhanja ” mountain is the prominent peak of Yeoor. It is well known for its flora and fauna among the nature lovers for school education trips, walks, treks, and bird watching. It is a buffer zone at the eastern end of the Sanjay Gandhi National Park and is a haven for biodiversity. The area of Yeoor comprises of six traditional villages, having a population of mainly Adivasis (tribals) who earn their living by cutting wood and selling organic fruits, growing rice and fishing in the nearby dam.

Talao Pali or Masunda Lake is one of the most popular hangout spots in Mumbai offering a lot of exciting activities and food to the locals and the tourists. Talao Pali derives its name from two words- Talao and Pali both meaning water bodies. It is not only considered as one of the most beautiful lakes in Maharashtra but also one of the most popular spots for a small picnic or a casual stroll in Mumbai. Several fauna varieties around it dot this lake along with plenty of birds that visit this lake, especially in the evenings. This place not only serves the tourists with several activities but also allows tourists to find solace in the arms of nature, away from the crowd and pollution of the city.

Having the utmost peaceful and beautiful environment in Thane, Talao Pali offers the tourists the beauty of nature at free of cost. The rides are also available at a nominal price, making it a common hangout spot for teenagers. Starting from bird watching, enjoying some delicious food to having an adventurous water scooter ride, Talao Pali offers it all and no wonder it is one of the favorite tourist spots in Maharashtra. There are several small food joints located near Talao Pali serving local lip-smacking snacks like Vada Pao, Missal Pao, and Bhel Puri.

The Ovalekar Wadi Butterfly Garden is situated in Ovale Village in Thane, Maharashtra. The park is home to over 500 species of butterflies. There are over 80 species of plants that serve the butterflies in some way; nectar or breeding. The butterflies migrate from October to December and then from April to June, therefore, making these months best for visiting. The park is an oasis for species of butterflies like the Gaudy Baron, Striped Tiger, Swordtail, Bluebottle, Commander, Common Crow, Wanderer, Crimson Rose, Monkey Puzzle and Grass Demon.

One of the oldest and most famous forts is the Ghodbunder Fort constructed around the 16th century AD. The place derives its name from two words- Ghod meaning horses and bunder meaning Fort. The fort derived this name because it was initially used by the Portuguese to trade their horses with the Arabs. Though in its ruins, Ghodbunder Fort has been a massive tourist attraction in Thane, Maharashtra and is therefore maintained by the archaeological survey of India. Christianity has existed in Thane since the 16th century, and the St John the Baptist church stands in glory as a proof to it. This church is one of the oldest in Thane and has existed for over 500 years. This magnificent church surrounded by the Masunda Lake imparts a picturesque view to the entire city and has been a significant tourist attraction. The rich cultural heritage and architectural beauty have enhanced the importance of the church among tourists in general and Christians in particular. Christians or not, tourists make it a point to visit this century-old church at least once when they are in Pune.

St John the Baptist Church has been quite a favorite among tourists and the local Christians of Thane. The church attracts a large number of people during the occasion of Christmas and Easter, which is celebrated with great grandeur. Thus to enjoy the spectacular beauty of the church, these are the times that tourists should choose to visit. 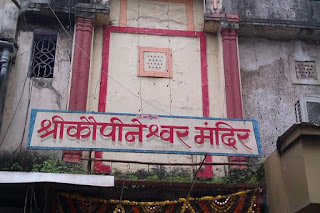 Kopineshwar Mandir located in Thane is amongst the most sacred temples in Maharashtra. It is devoted to the Hindu god Lord Shiva, he is also considered as the patron god of Thane. The temple is situated near the banks of Masunda Lake where the shivling was found.

The temple consists of two entrances, one entrance is located opposite Masunda Lake and the other is inside Jambli Naka Market. At the main entrance of the temple, you will be greeted by a huge sculpture of Lord Shiva’s Nandi Bull. The Shivling inside the temple is about 5 feet tall and 5 feet broad, it one of the largest Shivling in Maharashtra.

It is said that the Shivling grows every year and when it touches the roof of the temple pralay, end of the world, will take place. Hundreds of devotees visit the temple every year during Mahashivratri. The temple also consists of shrines dedicated to various Hindu deities like Brahma, Hanuman, Garuda, and Kali.

Situated in Samata Nagar in Thane, Korum Mall is one of the most popular malls in the district which spreads over half a million square feet. Besides the big brand stores and outlets, both domestic and international, that sell apparel, footwear, home decor, home appliances, electronics and everything of everyday utility and fashion, Korum Mall also has a leisure center, hypermarket, family entertainment center, four-screen multiplex, and a basement parking. The mall has been divided into sections with each floor dedicated to a particular category.

Thane Creek located near Mumbai Maharashtra is a precious feature of the city that is widely recognized for its natural appeal. The area is credited as an Important Bird Area by the Bombay Natural History Society, due to its large variety of migratory bird species. Teeming with life, one may encounter gregarious flamingoes, Avocets, Northern Shoveler, Grey Heron, Egrets, Plover, Sandpiper, Black-headed Ibis, Whimbrel, and even the occasional crab lurking in the creek. Thane Creek is panoramic views featuring rich green mangroves, and exquisite biodiversity creates a peaceful and rewarding atmosphere, ideal for adventure seekers, avid bird-watchers, photographers and nature lovers. The best time to visit Thane creek is from October to March.

Now that you know about all the amazing places to hang out in Thane with your friends, family, and partner, we suppose you should get on with planning an outing. And, the best part is that almost all the places are close and provide hassle-free connectivity. So, Have a great time!

HHangout
Welcome, To Explore Thane! In this article, we going to share “Best Malls in Thane To Visit” Malls…
Read More
HHangout
Known as the “City of Lakes” with more than 30 lakes, Thane is the immediate neighbor of Mumbai…
HHangout
Photo Credit: @explorethane Mama Bhanja is a hill located in Thane West at Lokmanya Nagar.   It is…
Read More
HHangout
Time wasted at the lake is time well spent. If you want to spend time watching a…